2021Women We Should Know Podcast

Barbara Bentree joins Lesley to take WWSK listeners on a journey from rural Minnesota, into the heart of California’s music industry, and on to New Mexico as a budding film maker. 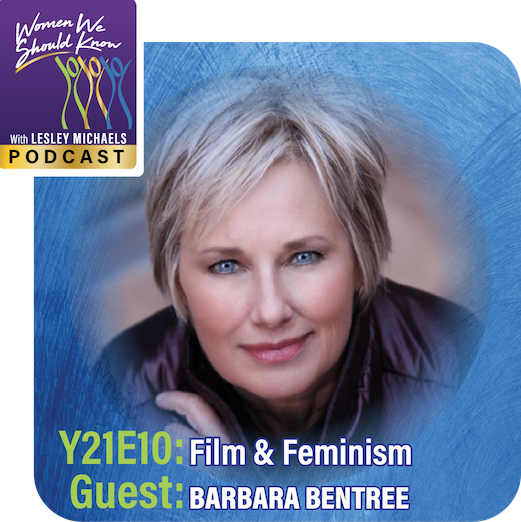 Each longtime feminists, Barbara and Lesley bring a broad variety of topics to the conversation. Each that pointedly effect the lives of women. From ‘to mother’ or ‘not to mother’, to how we can do better for our boys so they grow into men equipped to engage in full partnerships with women, to the journey of older women who chose to have abortions during a period when it was illegal throughout most of the country. They discuss the power of film as a vehicle for educating society, lawmakers, as a tool for lawyers in court and a stage for giving voice.

Barbara Bentree is a multiple award-winning filmmaker and musician. She produced vocal music for “The New Mickey Mouse Club” television show for THE DISNEY CHANNEL. During her tenure she auditioned, cast and worked with Ryan Gosling, Justin Timberlake, Keri Russell, Britney Spears and Christina Aquilera to name a few. Since coming to New Mexico, Barbara has developed her own original projects, all inspired by her desire to change the conversations about women, animals and the environment.

Barbara’s feminist projects include her first film titled, “My Choice” which focuses on conversations among women who choose not to have children. In partnership with Santa Fe NOW, Barbara created a series of intimate interviews with women about their abortion experiences titled, “Abortion Stories.” This video was used to educate NM representatives during the past legislative session. Barbara’s current film is the Feature documentary, “Dave Grusin: Not Enough Time.”

Barbara is currently writing two original feminist stories to become books, podcasts and films. “Of Thee I Sing” and “Out Of Bounds”. Both are rooted in Barbara’s mission to help change the way young girls see and value themselves.