Ep. 31 | How Women Can Speak So Men Will Listen

Elizabeth Bachman recently joined Lesley to discuss her journey from actress to director, to directing over 50 operas, featuring such luminaries as Luciano Pavarotti and Placido Domingo, to forming a non-profit opera organization that supported young up and coming opera singers, to becoming THE go-to coach for professional women in leadership, to becoming a much sought-after speaker in her own right. 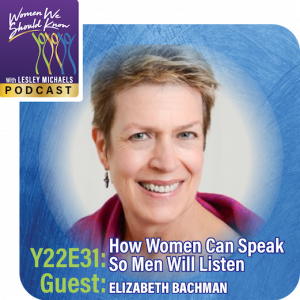 As such, she is highly revered throughout Silicon Valley, as well as nationally and international. Elizabeth shares how this journey revealed that the skills to sell a product or company are not that different from selling a song. Learning how to be the person out front in order to build her non-profit organization taught her how to speak with authority so that both women and men would listen, skills she now passes onto high level women in tech and law. Elizabeth helps women understand how they are sabotaging themselves. One of the key points Elizabeth garnered though her many pivots was being able to ask for help without falling into the trap women fall into, of feeling like a failure because they can’t ‘do it all’ by themselves. Among the many interesting points Elizabeth discusses is understanding she’s developed by owning an international company about the difference in assumptions about how things work, based on different country cultures. Please join us for this fascinating conversation.

Elizabeth Bachman is the founder of Strategic Speaking for Results and THE go-to person for advanced level training in Speaking, Presentation Skills, Sales and Leadership. Hailing from Portland, OR., she grew up as an actress then switched to directing in college and found artistic home as an opera director.

Elizabeth brings a global experience to her clients, including being fluent in 5 languages.

She discovered the Art of speaking to get results when she founded an Austrian-American opera company and had to raise $100,000 through speaking. (Mostly in $100 increments.) However, after 30 years of teaching as well as directing such luminaries as Luciano Pavarotti and Placido Domingo in more than 50 operas around the world, Elizabeth realized she was losing the ability to be transported by the glory of music. It was time to do something else.

All of her interests came together when in 2011 she started training presenters.

Elizabeth works with high-level women in tech and law who aren’t being heard when they speak at meetings. And thus they see promotions pass them by. Elizabeth helps them develop strategies for raising their profiles within the company, while setting themselves up as thought leaders through interviews and publications. Elizabeth is a sought-after speaker and strategist in Silicon Valley, nationally and internationally. She also hosts the internationally respected podcast: Speakers Who Get Results. Elizabeth divides her time between the West Coast of the US and the Austrian Alps. She is happily married, loves walking in nature and curling up on the couch with a cat and a good science fiction/fantasy novel.