Ep. 34 | From Secret Misogynist to Women’s Advocacy with Paris Cutler

In this episode Lesley is joined by Australian media personality, Paris Cutler. She shares the story of her early careers where she survived the brutalities of the patriarchal systems. 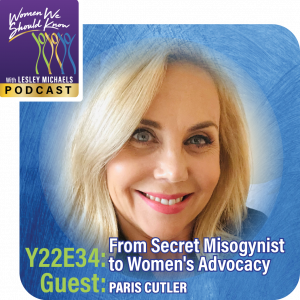 Paris overcame great challenge on her journey through law to becoming the most successful of the four women on the trading floor in the Australian Stock Exchange and ultimately diving in entrepreneurialism.

She speaks candidly of her discovery that she was “a secret misogynist” and the tough resilience required to break free from the well-trained tradition expressed by many female professionals, of being a woman in stilettos while addressing business and other women as a men do. Paris reveals to the listeners the brutal treatment she received, predominantly from women, as her entrepreneurial star rose after buying a little cake shop that made her the ‘cake maker to the stars’ and the star of one of the first baking reality TV shows to air. Now a vocal advocate for women and gender parity, Paris articulates the importance of women taking up the task of raising feminist men, in order for all of us to begin to see real change in business and society at large.

Paris Cutler is a Blue Ocean Business Strategist, life coach, committed optimist, and seasoned business owner. She helps entrepreneurs, social media influencers, and corporate executives become market leaders by uncovering their real purpose and designing a successful brand and career that aligns with it. In turn, creating a fulfilling life that vibrates with success and meaning.

Five times published author, speaker, and media personality, Paris cut her teeth as CEO of Planet Cake. She purchased a tiny cake shop in 2003 and transformed it into a #1 national brand and seven-figure business. As ‘cake maker to the stars,’ Paris had clients like Rhianna and Celine Dion, sold books worldwide, and launched the largest cake decorating school in the southern hemisphere. She also starred in ‘Planet Cake’ – one of the first baking reality TV shows, which was distributed in over 20 countries by BBC Worldwide. She has won an Astra Award and was a finalist for Ernst & Young’s ‘Entrepreneur of the Year’ Award.

As a business strategist and life coach, Paris has found her spiritual home on LinkedIn. Using the platform to help achieve her mission, that every business and individual lives and works according to their values and heart mission. She believes entrepreneurs have the power to change the world, save the environment and bring about radical positive change.