In this episode Dot Bekker joins Lesley to share the story of her journey of a lifetime. In late 2018 Dot left Europe after 21 years to drive home to Bulawayo, Zimbabwe. 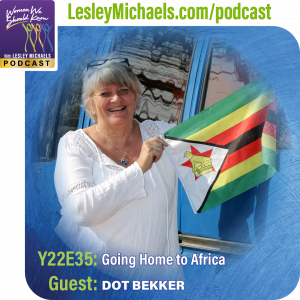 Taking a ferry from Barcelona to Morocco with her 20 year old Ford Transit she drove on her own through 18 African countries, 20000km over 8.5 months. Dot shares the journey through a part of the vast continent of Africa that she was not familiar with laughing that, “Ignorance got me a very long way.” Dot is passionate about Africa and lovingly paints a warm portrait of it’s people’s capacity for great humour, their openhearted waves to everyone they see, be them friend or stranger and their quickness to give aide. Something she learned of while driving through one particular country that had no fuel stations. Rescued by friendly strangers introduced her to she dubbed the tradition of ‘African Roadside Assistance.’  But there are also the trials that Dot speaks to.

Her passion is to make strides toward Gender Equality through the education of girls and Entrepreneurship.  In a country where 65% of the girls can’t go to high school due to the cost of both the school and the required uniforms, Dot is a committed voice and activist for rethink and reinventing education. Joining Lesley and Dot for this amazing conversation is sure to inspire and delight while expanding understanding of the world we all share.

Dot Bekker is Bulawayo born and raised and has lived in 6 countries on 2 continents, having also lived in SA, UK, Portugal, Luxembourg and Spain.

She has worked both in large corporate organisations, small family run businesses as well as a variety of industries and businesses of her own before launching into Coaching, which she has been doing for almost 20 years.  As a qualified and accredited, Business Coach and an Entrepreneur Strategist Dot works primarily with small and medium sized businesses across Europe and Africa helping them with their online and offline business strategies.

Dot has also contributed to the Boards of a number of organisations over the length of her career, the most notable being: National Association of Women Business Owners South Africa, Breakaway Business, Women’s Bureau, Coaching Circles UK, International Coaching Federation Luxembourg, The Network Luxembourg and presently Kusasa Girl’s education fund – Founder & President.

She has written the book about her journey called Going Home to Africa and is writing a sequel about her return to Zimbabwe after 38 years away.