Ep. 38 | A Life Committed to Equality

Lesley recently experienced the honor of sharing a conversation with Dr. Martha Burk who has lived and worked on the forefront of the struggle for women’s rights for the majority of her life. 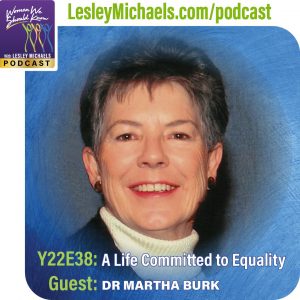 IN CELEBRATION OF WOMEN’S HISTORY MONTH. Dr. Burkguides the listeners on an edifying walk through the details, nuances and progressions of the legislative struggles that have been taken on behalf of women through the decades. Glancing back to 1871 when the 14th amendment was passed that claimed to give all person’s equal protection, she reminds the listener that ‘persons’ was exclusive to men. The conversation proceeds to 1920, 52 years later, when women finally got the vote. Dr. Burk drops in on the 1960’s when the Equal Rights Amendment was forming and the early 1970’s and the struggle for ratification. Finally, on to 2020, 149 years after men were given equal protection under the U. S. Constitution, the Equal Rights Amendment received the number of state ratifications necessary to give women equal protection under the U.S. Listeners will learn why this did not produce resolution to that protracted struggle. Through this journey Dr. Burk highlights the struggles that are yet ongoing and a deep understanding of those, once thought resolved, are back in the frame, and are a threat to all women, be they feminist or not.

Dr. Martha Burk is a political psychologist and women’s issues expert specializing in gender pay equity, and co-founder of the Center for Advancement of Public Policy, a research and policy analysis organization in Washington, D.C. She serves as the Money Editor for Ms magazine, and she is a syndicated newspaper columnist and blogger for womensvoicesmedia.org. Her public radio show Equal Time With Martha Burk originates from KSFR Public Radio in Santa Fe, NM. Her latest book, Your Voice, Your Vote: The Savvy Woman’s Guide to Politics, Power, and the Change We Need (2020-2021), is a Ms magazine book selection. Her work has been published in major U.S. newspapers and she has appeared on all major television networks in the United States.

From 2000-2005 Dr. Burk served as Chair of the National Council of Women’s Organizations a network of over 200 national women’s groups collectively representing ten million women. In that capacity she led the campaign to open Augusta National Golf Club to women, and she remains at the forefront of change for women in corporate America. She crafted the first-in-the-nation gender pay equity initiative at the state level in New Mexico in 2010 as a senior advisor to then-Governor Bill Richardson, and continues to advise business organizations and government entities at all levels on gender pay equity.

In addition to extensive work on domestic policy, Dr. Burk has conducted training workshops with women’s NGOs internationally in Macedonia and Kuwait, under the sponsorship of UNESCO, USAID and the United Nations, and has conducted training in the U.S. for delegations from Russia, Botswana, Korea, Romania, Bulgaria, and the Middle East. She has recently been a member of official U.S. delegations to international conferences in Cuba, Iceland, Lithuania, Latvia, Estonia,and China. Dr. Burk has been asked by the U.S. Department of State to brief the foreign press on the U.S. presidential elections several times.

Dr. Burk has served on the Commission for Responsive Democracy, the Advisory Committee of Americans for Workplace Fairness, the Sex Equity Caucus of the National Association for the Education of Young Children, and the board of directors of the National Committee on Pay Equity. She has also served as an advisory board member to several other national organizations, including the U.S. Committee for UNIFEM, and Women for World Peace, a project of the Twenty First Century Foundation, and the PAX World Fund.