From play writing and production to Climate Protection to adventures in the Arctic, Chantal Bilodeau recently joined Lesley to tell her stories of adventure and passion. 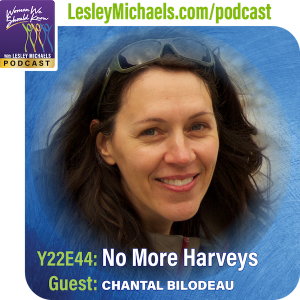 From play writing and production to Climate Protection to adventures in the Arctic, Chantal Bilodeau recently joined Lesley to tell her stories of adventure and passion. Chantal shares how the costly events of Hurricane Harvey, followed by the exposure of Harvey Weinstein served as inspiration for her play No More Harvey’s, one in a series of plays centered on Global Climate Change. With the Great Artic as the backdrop Chantal talks of how getting to know the Arctic and the people who live there is the most exciting thing that has happened to her, professionally. Listen in as Chantal reveals the genuineness, humility and kindness of the Arctic people that continues to impact her and how she sees life. The listener will also learn of Chantal’s upcoming 5-day workshop called the “Artists & Climate Change Incubator” that will be held in Anchorage this summer and some of the ways she hopes to expand and continue her impact.

Chantal Bilodeau is a Montreal-born, New York-based playwright whose work focuses on the intersection of science, policy, art, and climate change. She founded the Arts & Climate Initiative over a decade ago and in her capacity as artistic director, has been instrumental in getting the theatre and educational communities, as well as audiences in the US and abroad, to engage in climate action through programming that includes live events, talks, publications, workshops, national and international convenings, and a worldwide distributed theatre festival. She has spoken about the power of live storytelling to move people toward climate action in conferences and at universities in the US, Canada, and Europe, and has contributed to several academic volumes, including International Climate Protection (Springer, 2019), and Extraordinary Partnership: How the Arts and Humanities Are Transforming America (Lever Press, 2020). She is the co-editor of an anthology of short plays about the climate crisis titled Lighting the Way (2020). Awards include the Woodward International Playwriting Prize as well as First Prize in the Earth Matters on Stage Ecodrama Festival and the Uprising National Playwriting Competition. Her work has been presented in a dozen countries around the world. She is currently writing a series of eight plays that look at the social and environmental changes taking place in the eight Arctic states. In 2019, she was named one of “8 Trailblazers Who Are Changing the Climate Conversation” by Audubon Magazine