It’s no secret that only in the past 10-15 years have women started breaking through the patriarchal standards that kept any of us with aspirations that exceeded “Girl Friday” out of the room. 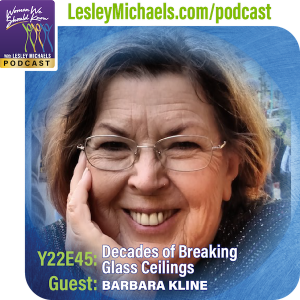 It is with respectful gratitude to those mighty women who came on the scene early and refused to be hidden in a corner that we are now reaching into the highest echelons of business and politics.

Barbara Kline is just such a fierce and audacious woman. The first woman in a majority of the great rooms of the tech industry having stood tall and looked right in the face of questions like, “but what if you get pregnant” or the rebuffs of, “you’ll be taking the job away from a man who has a wife and kids to support.”  Questions and statements that are purely unimaginable to the millennial and Gen-Z women of today’s business world.

Tune in for this conversation between Barbara and Lesley of those early days and the ones that followed when during the .com crash, Barbara naturally transitioning into entrepreneurship, founding numerous companies. And ultimately starting another entirely new career in her 60’s.

Barbara Kline is Certified Business Broker and a Senior Advisor with Absolute Investment Realty, a commercial real estate firm in Albuquerque, NM. She was a serial entrepreneur for many years prior to getting her first certification as a business broker. She has founded numerous companies including Breakthru Communications, a public relations firm specializing in promoting technology and technology companies, a day spa, an events center, and a publishing company. She has worked internationally, spending three years in Brussels with Intel and one year as VP of Global Marketing for a Dutch software company. Barbara was an early member of the Corrales Mainstreet Board and, during her six-year tenure, was instrumental in developing a firm footing for the government/community partnership. In 2008 she received a state Mainstreet award for Excellence in Fundraising. She also served on the Rio Rancho Regional Chamber of Commerce board for three years where one of her roles was liaison to the Corrales business community. One of her proudest accomplishments was organizing and leading a trade mission to Israel that was a jointly sponsored by ACI and the NM-Israel Business Exchange, where she was a board member. Barbara is a passionate supporter of business owners. She uses her experience to help business owners with property sales, purchases and leases, as well as helping owners reap the rewards of their investment in their businesses at the time of sale. When she is not working, she loves to travel and through her international work, she has acquired a “working knowledge” of French and Spanish and can make her way through a newspaper or a basic conversation. Her German is limited to asking for a hotel room and reading menus. She also designs custom jewelry and experiments with cooking onion-free meals for her picky spouse. She is a lapsed Master Gardener and plants a vegetable garden every year, which sometimes produces vegetables.