Ep. 47 | The Miraculousness of Life

There are those stories we all hear that reveal a level of resilience that many of us cannot imagine. Mary L. Jury has lived a life that is one of those very stories. 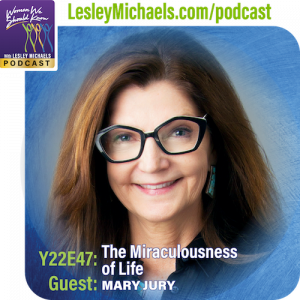 Including, the extraordinary events that allowed she and her ‘now’ husband to come to know each other, fall in love, and become the inspiration for one author’s romance novel.

Join Lesley as she follows Mary through her amazing retelling of events that would have crushed a lesser woman to become an inspiration to many. Mary shares some of the key mindsets that lifted her from a wheelchair, having been t-boned on her bicycle. The same mindsets that helped her to remain standing after losing her mother, 32yo son and 8yo niece over a short 10-month period. In 2019 Mary received her certification from Brené Brown to facilitate her Dare to Lead curriculum and is now gearing up to use this in supporting others to heal their own grief.

Mary L. Jury describes her life as a fairly eclectic, non-linear journey. She was a college athlete, single mom, entrepreneur and is now on the journey to coaching, (perhaps around grief) and facilitating Brené Brown’s Dare to Lead curriculum. In 2010, Mary was t-boned by a car while riding her bike. Thrown 40ft she landed on her head. Sustaining substantial injuries, Mary was in a wheelchair for 8 weeks. At that time, her current husband & she had only had 2 dates. Nevertheless, when he heard of the accident he went right to the hospital and visited regularly. The two got to know each other through Mary’s recovery. A romance novelist once used their story as inspiration for a book. They were married in January of 2012. On March 17, 2019, Mary’s mom passed away. 3 weeks later, her 32yo son, Ryan, died (4/12/19- her mother’s birthday) and on January 1, 2020, Mary’s 8yo niece died of cancer. She sold her Contract Furniture Business in January 2022 and looks forward to the next chapter.