Ep. 56 | Sorting Realities on the Far Side of America

Betsy Gaines Quammen PhD joins Lesley in this episode for a deep dive into the state of conversation and conflict currently taking a front seat in the U.S.. 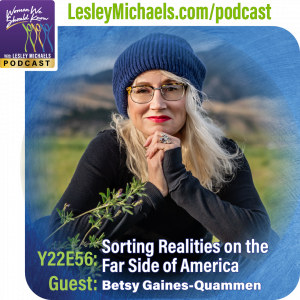 Betsy shares her way of weaving into conversations with people of completely different ethos to educate, and inspire new thought while furthering her own understanding. All of this is a part of Betsy’s daily activism. From old school conservative cowboys in Montana who have found themselves in admiration of turn of the century photographer, with a female companion, Evelyn Cameron, to powerful indigenous women standing into their leadership, Betsy pursues conversations about how to turn the tide and revitalize the humane in our collective lives. Lesley and Betsy dive into how imperative it is for white women to rise out of passivity and silent complicity to stand against the weaponization of race, culture and conversation about anything that makes someone else uncomfortable. Those tuning into this conversation will find it provocative, radically honest and thought provoking.

Betsy Gaines Quammen is a writer, historian and conservationist. She is the author of American Zion: Cliven Bundy, God, and Western Public Lands. Her work has been featured in The New York Times, New York Daily News, and the History New Network. She has a doctorate in Environmental History from Montana State University and Master’s of Science in Environmental Studies. Over the years, she has studied various religious traditions, with particular attention to how cultures view landscape and wildlife. She worked for years on conservation projects in Bhutan, and throughout the western United States—first with the East African Wildlife Society in Kenya and later with various conservation groups in Montana, Idaho and Wyoming on grizzly bear conservation, ecosystem protection and grazing issues. The rural American West, pastoral communities of northern Mongolia, and the grasslands of East Africa have been her main areas of interest. Betsy lives in Bozeman, Montana with her husband, writer David Quammen, three huge dogs, an overweight cat, and a pretty big python named Boots. She is the is the Best Selling Author of American Zion: Cliven Bundy, God, and Public Lands in the West, which has just gone into it’s second printing. Her next book, True West: Sorting Realities on the Far Side of America is out in fall of 2023.