The list of what women were allowed to do in the professional world sixty years ago is limited to secretarial duties. 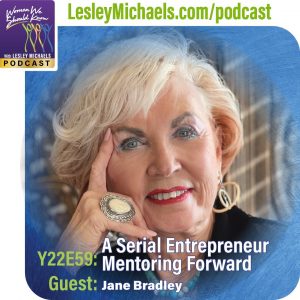 Fortunately, there were those emboldened and audacious few who ignored all the limitations of the time to carve new inroads for their own fulfillment, and leave doors open behind them to give access to the women who would follow.  Jane Bradley was raised on a sprawling, working ranch in New Mexico and empowered by her cowboy father to go places no woman of her time had ever gone. You can’t command those prices for your paintings, you’re a woman. But she did. You can’t open a gallery on the world-famous Canyon Road in Santa Fe, you’re a woman. But she did. Tired of having to drive all the way to Dallas for art supplies she opened an art supply store, that in its first year became the anchor store in what was then, Santa Fe’s newest outdoor mall. From being one of the earliest Executive Directors of Genesis Business Incubator, University of Arkansas, to moving to Russia to manage a Russian football team, to remaining in Russia during perestroika and working with technology transfer, to returning to New Mexico to found a series of successful businesses, Jane has always made her own rules and done it her own way. Along the path she has spent many years sharing the wisdom gained as a serial entrepreneur by mentoring those who would come up behind her. Join Lesley and Jane for a fascinating conversation into everything from the power and necessity of mentoring to daring to create new pathways.

Jane Bradley is a third generation New Mexican.  The love of art and a natural talent made a BFA  a natural choice.  After success as a studio artist and gallery owner in Santa Fe, Jane became intrigued by the process of business. This interest led to additional education followed by other varying   and successful business endeavors. The ability to teach and share has been ongoing and a constant in Jane’s life.   Curiosity is the one word that most clearly defines Jane’s life. This curiosity has led to many personal and professional successes.  From moving to a small hamlet in Arkansas with prince charming –  to becoming the Executive Director of the Genesis Business Incubator at the University of Arkansas  – to moving on to Russia during perestroika and working with technology transfer – to returning to the much loved and missed New Mexico, each new challenge was attacked with enthusiasm and determination  .

Jane was honored and humbled to be named one of the Most Influential Women in New Mexico in 2016 and to have been awarded the governor’s award for Outstanding woman – 2009 Certified Mediator for the Municipal court system working with Juvenile offenders and Parent/teen conflict resolution. Appointments: National Small Business Administration (SBA) Advisory Council  Chamber of Commerce of the United States. Business Advisory Council  Santa Fe County Housing authority City of Santa Fe Plaza use committee Latest Business Startup:  2017 – Smartspider. PROS, Inc DBA Smartspider.net Paintings and “Jewelry by Jane” can be seen and purchased at leading galleries and museum gift shops. Watch video version