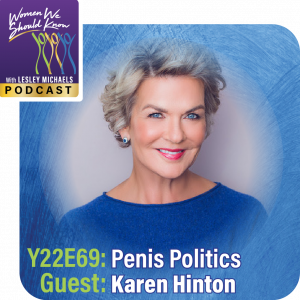 From early life in Mississippi to Washington DC, NYC and back to Mississippi, plus a side jaunt to New Orleans Karen speaks directly and transparently to the issues she raises in her Best Selling book. She speaks to the listeners of how her abiding commitment to dismantling racism placed her in the position to be a spokesperson regarding its devastating effects.

Karen addresses how the dynamic of how men’s internal struggle becomes an outward abuse of women, and how this is exacerbated in the case of men who hold power in any manifestation. With great respect for what #metoo accomplished, Karen saw there was no attention being given to the middle class and low-income women. The more she studied, the more clearly she realized the degree to which the issue of sexual abuse is pervasive, through every sector of society and even into our schools. Within the pages of her book and during this conversation on Women We Should Know, Karen offers action points that we as women can take to put a stop to these abuses. She reminds women that we are more than 50% of the population, and within that rest great power.

Mississippi native Karen Hinton is a nationally-recognized media professional in Washington and New York. Best known for her role as press secretary to both former Housing Secretary Andrew Cuomo and New York City Mayor Bill de Blasio, Hinton played what Politico dubbed the “Helen of Troy role” in the clash between Cuomo, now the former Governor of New York, and Mayor de Blasio. The New York Times called the clash “one of America’s ugliest political feuds.”

Hinton cut her teeth as the press secretary for the first Black Congressman from Mississippi since Reconstruction in 1986. The Democratic National Committee hired her in 1989, serving a similar role for Ron Brown, who was the first Black Chairman of the DNC and a key political strategist to elect Bill Clinton as President. In 1995, Hinton joined the Clinton Administration as press secretary for Cuomo at the U.S. Department of Housing and Urban Development. During that time, President Clinton began to face charges of womanizing (and worse). Hinton later relocated to New York and became Mayor de Blasio’s press secretary. She found herself at the center of the crossfire between longtime frenemies Cuomo and de Blasio, often becoming the subject of news coverage herself.

Known from never ducking from a fight, Hinton was at the peak of her career when a catastrophic brain injury from a freak accident confronted her with the battle of her life. Emerging from a coma, learning to walk and talk again, Hinton was determined to “speak up not shut up” on issues involving women, men and power in politics.