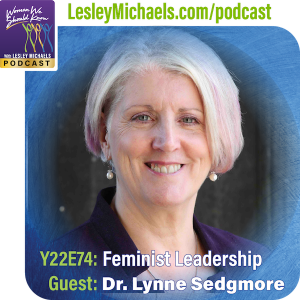 Lynne has spent her life working to master the skills of leadership and share them forward to the women around her and those with whom she can have influence. She generously shares many of the insights, which any listener in the business world will benefit from, that she developed through her decades in business and organizational leadership. A radical role model who has challenged the patriarchy long before it was commonly acceptable in the business world, she produced positive in the trajectories of each of the companies and organizations she headed. A cornerstone of Lynne’s success is her understanding of the essential nature of fluid communication founded in emotional intelligence. Lynne shares a valuable overview to the power of establishing and communicating clear values, maintaining a ‘no blame’ culture, and sustaining 360̊ feedback processes. She also reveals how her new program, based on her recently released book, Goddess Luminary Leadership Wheel, is finding a quickly expanding audience due to Lynne’s grounded, thorough, and actionable approaches that speak to women who have been looking for a new entrance point to the next level of their own leadership genius.

Dr. Lynne Sedgmore is Chair of the Glastonbury Town Deal, leading an investment of nearly £25 million for the town. She is a certified coach and organisational/community consultant working freelance with CEOs, Chairs, senior leaders and teams from the education, faith, charity, health, community, sport and private sectors. She also sits on the boards of Glaston Centre, The Centre for Responsible Leadership USA and the international IAMSR. . She chaired the UK Interfaith Foundation and was a trustee of Anne Frank UK.

She held 3 Chief Executive roles within Further Education in the UK for 17 years and has been a non Executive Director on over 25 Boards. Her previous roles include CEO of the 157 Group National Policy think-tank of FE Colleges with a combined budget of £1.5 billion, CEO of the Centre for Excellence in Leadership (CEL), Principal of Guildford College and Head of Croydon Business School. She was a member of the 2009 Prime Minister’s UK wide national review of public sector leadership. She has worked in 10 different countries to develop leadership.

Lynne specialises in fostering high performing and self-aware leaders. She combines academic rigour and practical organisational experience as a CEO, alongside powerful insight, emotional intelligence, rapport and the ability to be deeply present to individual and organisational needs.

She has an MSc in Change Agent Skills and Strategies and a Doctorate in Leadership of High Spirited, High Performing Cultures.

Her organisations have won numerous national and international awards including the International Spirit at Work Award, the British Diversity Award.

Lynne is a mother, stepmother and grandmother and loves exploring different cultures and spiritualities.

Connect with Lynne on her various platforms: